It just occurred to me that I never showed you the finished placemats I made for my daughter. (They only took me all of last week.) Who knew that 8 placemats would be such a project? I must admit though that lately I'm not moving too fast on quilting and projects. It's finally nice where I live and I did have to get to my planting too. If I didn't get those tomato plants in as soon as possible, I might not get any red tomatoes by the time the cold weather comes back. Last year I think I was stuck with 10 lbs of green ones and we're not great ones for "fried green tomatoes"!
Anyway, here are the placemats. I'm not sure if she really liked them or not. She said she did, but she's nice that way anyway! I'm sure you've heard about the spring bloggers quilt festival hosted by Amy from here. She's such a dear and does this twice a year. Last year at this time I didn't have a blog and couldn't show anything and last fall I posted a quilt I made in the spring. This time though I want to show you something really near and dear to my heart. I made it last year after it was in my head for months and once I showed it on flickr, it was wonderfully accepted and many suggested that I publish a pattern. Now, I really had no intention of ever doing that when I first made it, but then a lady I know through another sewing forum commissioned me to make one for her and because of that, I wrote down all the measurements and wa-la.......the beginning of a pattern. Who would have guessed at my age that would happen? Actually, God was looking out for me because my husband lost his job right around that time and the little $$ that I make from this has helped out already. I guess you just never know what life has in store for you, right? Darling daughter asked me a few weeks ago to make her 8 placemats, and she wanted them all the same, but different! (Funny thing is that I knew exactly what she meant.......! LOL) I guess that's because the leaves don't fall that far from the tree, huh? Well, she told me that she didn't care what I did, but she wanted to use them in summer. I knew the "Rainy Days and Monday" fabric by Riley Blake would be perfect because this is my kid who always would love to play in the rain. I showed you some of that fabric a few posts down.
Well, I have one to go and I'll certainly show you all of them all finished, but for now, I'll only show you the last one. Since she is my star, I had to make an appropriate one just for her! Do you remember this: It was one of my all time best Explore pics...and my latest swap placemat to Terrie. Well, because I was so inspired with everyone's cross quilts on flickr and then eventually making that placemat, that I just couldn't quit. I HAD to make a big one for me too and since I already had so many reds and off whites, I just continued in a bigger vein. 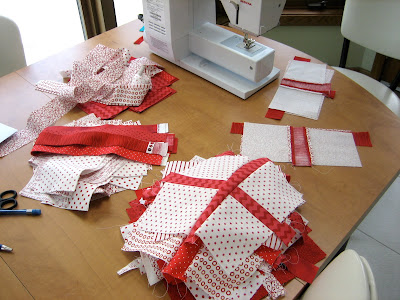 And then the trimming process:  (I just love seeing all those fabrics all smushed together.  it makes for such a fab pic!  No fair yelling at me for dumping those bigger pieces!!) 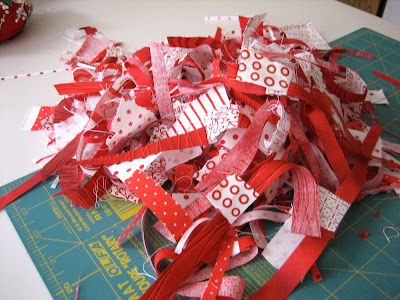 I just got it back from the quilter on Thursday and bound it right away.  I ALWAYS have my bindings ready to go right after I finish a bigger quilt since I know I'll be involved in another project later and would hate to stop to decide what to put on something I already did once I got it back.  That's just me though..... And the back.......see the tiny one on the bottom right? That piece was left from the placemat, so I just appliqued it right on there! Cool, huh? It's been real exciting around here every afternoon lately when the mail comes.  Either there are tiny little envelopes with 3.5 mini blocks for the QT Mini swap (and you'll see those when I get them all), or checks from wonderful ladies ordering Christmas Tree skirt patterns (I had to get that in, you know), and also things from other swappers to me.  The latest was from a very talented artist, Kim, or "bahamadawn".  Funny, but I always thought her name would be Dawn until we were swappers.  LOL  She's actually from the Bahamas though and I suppose the dawns there are wonderful....anyway.....you must see her talent: Not only did she send the lovely mini quilt which she hand painted, and hand stitched, and I believe made the copper labels for, she also made me a gorgeous journal cover (and journal) as well as a darling home made card to match. You must see her things.......go look now! She even makes jewelry and paints pictures.
Then, on the same day, if you can believe, I got the most wonderful package from, "marblesbestfriend", Debbie. She had my name in the ORBC (I think those are the right letters???) swap. This girl was GOOD! She stalked me and discovered that I should receive this: Funny thing is that "Rainy Days and Mondays'' is my latest passion fabric (other than some I haven't ordered yet) and I hadn't even showed my hoard to anyone, nor had I even started a project with it yet. I do have something in mind though, so it won't take long. Thank you Debbie! You are a MARVELOUS stalker!! I am touched by your insight.
So, that's it for this week so far. There are a few more things coming and I am working on a few things too. So stay tuned....
Posted by carol at 4:01 AM 3 comments: 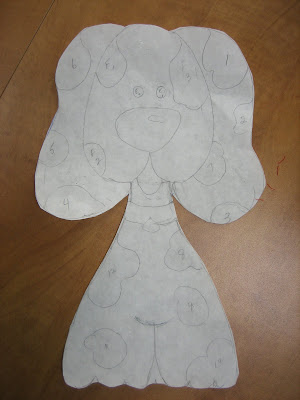 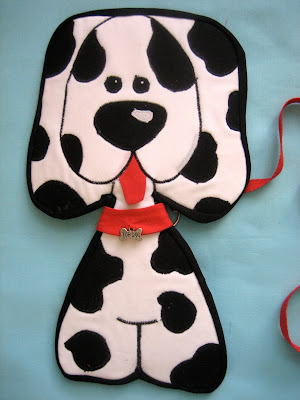 I put the label information on his tail. LOL
Posted by carol at 4:23 PM 9 comments:

Just so you don't think that I waste everyday quilting, I have to show you something that I made the other day.  Actually, I didn't make the shirt...it was purchased from Target and a friend graciously machine embroidered Elmo on it for me.  I made the matching shorts.  Whooppee!  I have someone in my life who eats, breathes, and lives Elmo and I am dying to give her this outfit.  She and her mom are stopping over tomorrow, and I'm excited. 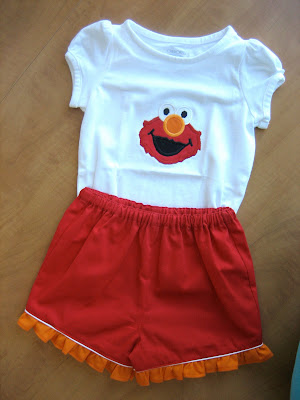 In the meantime, I'll continue to bug my postman and wonder where the stuff is that I'm awaiting and so anxious to show you.  Everyday I go to my mailbox with anticipation, I can hardly stand it!!
Posted by carol at 3:56 PM 3 comments:

While I am awaiting things I should be receiving soon from the swaps of April, I needed something to occupy myself while waiting.  I decided yesterday to join another little segment of the QT Mini swap for May.  I joined round #2 of the 3 1/2 mini blocks.  There are 9 of us in this round so 9 little 3.5 identical blocks are required.  My chosen color was hot pink.  I first was thinking of blue, but hot pink it was.  That color needed to be combined with black and white.  Today I got going and finished all 9 (thank goodness.)  They were really fun!  I combined my love of drawing, applique, and hand stitching.  All the white on the faces (other than the whites of the eyes) were hand stitched and I really think they have their own distinct personalities: And here is a close up of just one so you can see it better. Stay tuned to see my incoming goodies (one of these days). I can't wait!!
Posted by carol at 6:56 PM 6 comments: