I'm having so much fun!

I'm so glad the holidays are over and I can sew again!  Can you believe that I am having so much fun and I'm so busy that I haven't taken a nap since December?  lol  (Usually, I take naps when I'm either bored or sick....mostly!  I just thought I should throw that in there for clarification.)  It's gotten so bad that we hardly have a space to eat, the table is so filled with stuff!  (Current projects are done in the kitchen, spare...."immediate need" stuff is in the dining room.  You've seen the table!)  I do move the sewing machine though.  Otherwise Toby might eat the cords.  lol  He still loves to chew on stuff!!  Sweet baby!

Remember, I told you that I was starting 2012 with solids???  What fun!  Only.......I sure wish I could work faster!!!  I have so much in my head that it's getting to where I am making quilt wall hanging tops only, just to get the stuff outta my brain and on/in fabric!  That's NEVER happened before!  I think I'm on my 8th project right now.  I'm naming my newest series, "Abstracts"!  Quite clever, I know!  (Hey, I sew, I don't name stuff.............although I must admit that I ADORE naming my work!!  (Secretly I always wanted to work in a paint factory so I could name the colors..........honestly!!  Not many people know that about me!) 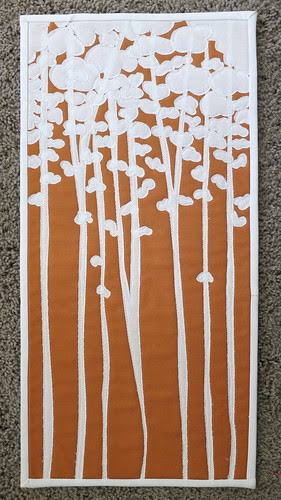 It's 9 x 19 inches.....and kind of ZEN like (or so I've been told).  In actuality all I was striving for in the beginning was to see if tree limbs would look better if I used my rotary cutter rather than a scissors.  Once I got them on fabric, I drew (and cut out) a zillion little pieces and fused them to represent the leaves.  It's okay, but rather dull for me, wouldn't you say???  Who would guess in a million years that I would have a background of gold???  Eikes!

I do like this one better!  I named this one, "Artsy-Fartsy".  (My cleverness has no bounds!!) 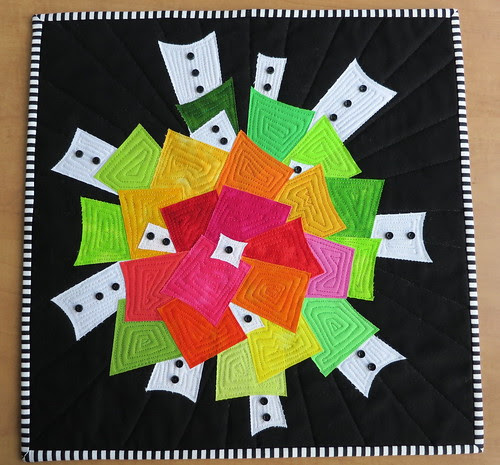 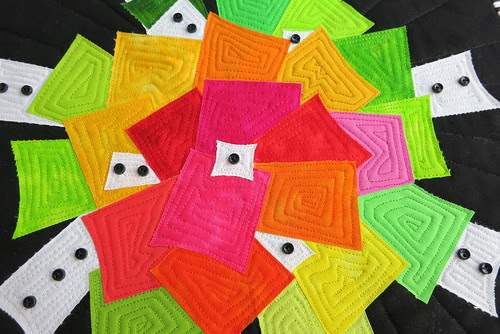 And the back (which could be a quilt itself if it wasn't for all the lint and birds nests.  Duh!)  lol  Incidentally, this wall hanging is 15 1/2 inch square! 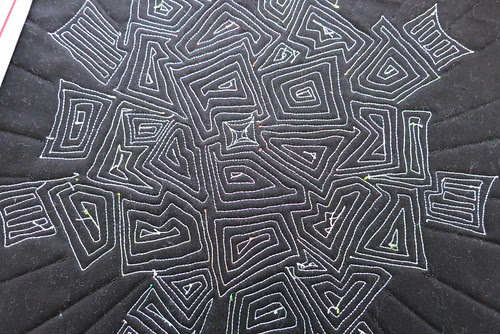 Oooh, looks you really ARE having a lot of fun! I love these. You are so very talented!

Well, if it is too dull for you, you have my address. I think that is one of my all time favorites...love the trees.

Gosh - 5.30 in the morning - have you started early or worked through the night??

Love number 2 - you are right Number 1 is just not really you!! (though still very striking)

I wish I had your energy! Both look fantastic!

Think of all the different colours of paint we would have it you had gotten that job. I love both of these and I expect that the others are pretty awesome too.

Your brain amazes me, Carol & I've told you that a million times! I love your creative instincts & wish I had some of them.

That black & white one with the tiny buttons looks like an abstract of guys in tuxedos, dancing around girls in flamboyantly colorful skirts...everything twirling & swirling together! I would have named it "Flamingo"!

I just love the 'trees' - not dull at all. And I agree with Retta - the other looks like dancers swirling around - how cool! WOnderful minis.

I think I hear your machine humming along right now! It's the sound of a factory of one going full force! So, what happens to the ones that don't get swapped? I think you'll need to start a flickr set in your photostream titled "For Sale". I bet they wouldn't sit there long!

Always some interesting ideas coming out of your head. Just add a touch of RED or some other bright color to the Trees, it will give it some pizzazz. The 2nd one is very Original and I like it too! Even the back. You do amazing stuff at your Kitchen Table.

love the trees - it is just unfinished. pop in a couple of colored pieces in the tree-tops and then do some wild stitching with a dark contrast thread. I see some bright orange pops of color or even some real dark brown. Keep going with this, I think you can make it a piece reflective of you!

Gorgeous! Love the trees! But also the Artsy-Fartsy! Even a great back. WOW!!!!

BTW ~ Never did get back to you about that magazine. I checked with three JoAnn Superstores on my way to MI and back a few weeks ago and not one of them carry that magazine. But, I finally broke down and ordered mine online from Erica's. I can't wait to see the article and read more about you and that awesome little quilt. thanks again

I am new to your blog and LOve Love Love it. I too thought of tuxedos when I saw your "artsy Fartsy" square. I do have a question I hope you can answer. Do you do portraits from photos for people to do their own squares? I love your "girls". I will probably be on this site all day trying to catch up. Email me if you like...kkweb1@aol.com

I am elated! I've never before met someone who wanted to follow a similar career plan. Naming colors would indeed be a fascinating job, not to mention hilarious. If I can't name colors then I want to work for a candle company and name smells.

I love your work. Keep it coming. And the trees....no they don't seem quite like you, until I view them upside down and then I see mini marshmallows bobbing in a sea of steamy hot chocolate. It makes me giggle and then it most definitely makes me think of you.

Hello,this is soooo wnderfoul, can I by this for monney??
I love this so much ♥♥♥

Oh wow, I love both of these, but I think my favourite is the one you call Artsy-Fartsy and who would guess, I didn't think I was Artsy.

Hallo,
What colours!!! is very nice, I like all your works are so lovely!!
My little blog:juliagarpra.blogspot.com
Kisses from Tenerife, Spain

A moment to tell you these r pretty amazing....always love your colors